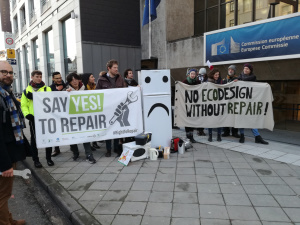 Community repair activists and NGOs greeted EU member state officials with several broken appliances this morning to protest the decreasing lifespans of consumer products and defend citizens’ right to repair their own appliances. The action took place as EU member states gathered to vote on proposals that would require manufacturers to make dishwashers easier to repair and longer-lasting by design. Activists urged member states to resist industry pressure and vote for ambitious repair requirements.

For the first time, proposed ecodesign measures could not only improve the energy efficiency of appliances, but also make them last longer, and easier to repair. Today’s vote on dishwashers is part of a series of votes which began in December covering ecodesign regulations for fridges, lighting and electronic screens, and will continue on 10 January with a crucial vote on the repairability of washing machines. This season of votes could set a precedent and bring minimum repairability requirements to other consumer products, including laptops and smartphones.

Broken appliances — something many people can relate to  — demonstrate the need for everyone to access products designed to be easily repairable, as well as timely access to spare parts and repair information. Consumers are tired of wasting money on products that are designed to become waste prematurely.

EU shifts from repair to recycling under industry pressure

The European Commission originally drafted ambitious proposals that would facilitate repair, but backed down after industry pressure. For washing machines, dishwashers and fridges, early drafts by the Commision proposed to make spare parts available to everyone. However, in the latest drafts spare parts will only be available to professional repairers, meaning that consumers, repair cafés and other independent repairers will not have access to spare parts, severely limiting the options a consumer has to get their appliance repaired.

Additionally, latest drafts focussed on design to facilitate dismantling for recycling, rather than repair. Yet the EU’s own waste directive dictates that repair should always be preferred over recycling, as much more resources and energy are recovered.

Citizens demand their Right To Repair

Public support for ambitious repair regulation is increasing. Repairable and longer lasting appliances save money, resources and the environment. Petitions in Germany, Italy and the UK asking for easily repairable and long-lasting products have been signed by over 210,000 people.

Community repair activists and NGOs are asking member states to improve proposed regulation by requiring manufacturers to design appliances to be easy to disassemble for repair with common tools. They’re also asking that access to spare parts and repair information is given to all types of repairers, including independent repairers such as repair cafés - not just professional repairers.

“By limiting reparability and access to spare parts for all, the EU is serving industry profits rather than our quality of life and that of future citizens. We demand that the EU listens to its citizens and their desire for repairable products” said Maarten Depypere, repair policy engineer at iFixit.